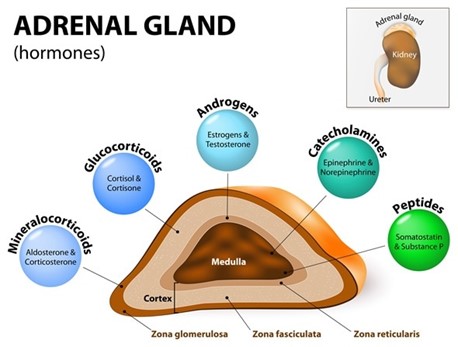 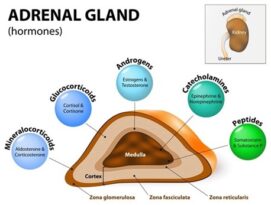 Within human body the Hypothalamus-Pituitary-Adrenal system exhibits a smart negative feedback system that self-regulates; as explained below: 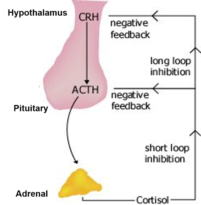 With regards to concerns of lower levels of adrenal hormones and its impact on patients’ life one must appreciate how important adrenal hormones are in daily life and in critical situations such as medical emergencies.

Normal adrenal gland responds to serious illness by making up to 10 times more cortisol than it usually makes. It automatically makes as much as the body needs. Now let’s consider a patient who lacks this ability to do so. And there are two reasons why an individual might lack the ability:

Management of patient with primary adrenal insufficiency includes both Glucocorticoid and Mineralocorticoid supplementation. Hydrocortisone is the mainstay of the therapy for Glucocorticoid replacement (adult dose varies from 15-30mg/day in 3 divided doses with the highest dose to be taken in the morning to mimic natural diurnal rhythm). During minor illness like an infection patient is advised to triple the dose and during major illness (such as planned surgery, suspected adrenal crises) dose is increased by 10 times. Fludrocortisone is used for Mineralocorticoid replacement (adult dose varies from 50-200mcg/day based on weight/ activity levels etc.) Dose adjustments are guided by regular monitoring of Sodium/Potassium levels, BP and blood sugar level.

Now let’s explore secondary adrenal insufficiency such as due to exogenous steroid administrations. It is obvious that systemic steroids carry the highest risk to suppress adrenal gland vs other routes of administration. However, it has been found that high dose of inhaled steroids or potent/ very potent steroids applied to rectal/genitals or large body areas are also able to trigger negative feedback and hence suppress adrenal glands.

Crisis occurs when the physiological demand for these hormones exceeds the ability of adrenal glands to produce them, most often in patients with chronic adrenal insufficiency when subject to an intercurrent illness or stress.

Distinguishing between primary and secondary adrenal insufficiency: We understand from Hypothalamus-Pituitary-Adrenal axis that adrenal insufficiency must be primary if there is plenty ACTH and adrenal glands are still unable to respond by generating Cortisol, and Aldosterone. On the other hand if ACTH is low/ very low then we know that the system is operating under negative feedback and adrenal glands are just not getting the message to generate endogenous hormones (cortisol and Aldosterone etc.)

If adrenal suppression is suspected morning Cortisol (highest levels are around 8:00-9:00 am, although specialist interpretation needed for shift workers/ pregnant ladies/ those taking COC pill or HRT pills). Each lab may use different measuring unit, however, if you get results in nmol/L and the results are ≤ 100nmol/L, it calls for urgent investigation and/or admission. And if the results are between 100-500nmol/L, patient should be referred to endocrinology.

ACTH levels are ↑ in primary adrenal insufficiency and normal or ↓ in secondary adrenal insufficiency. If it’s still unclear a short ACTH stimulation test (Synacthen) can be used. For the test patient needs to have an early morning pre-test blood sample taken, and then a dose of Synacthen (Tetracosactide, a chemical copy of ACTH) is administered. 30 minutes later another blood sample is taken to check cortisol levels. A cortisol level ≥420nmol/L indicates adequate adrenal response. Levels lower than this would either suggest Addison’s disease or marked adrenal atrophy secondary to prolonged absence of ACTH.

Do other drugs affect Glucocorticoids exposure?

Yes, other drugs when co-administered may increase or decrease the exposure to glucocorticoids. Some examples are explained below:

NPSA released in Aug 2020 explains that all patients with primary adrenal insufficiency are steroid dependent. The alert also states that patients receiving steroids for other medical conditions may also develop adrenal suppression. Both of these groups are at risk of developing adrenal crisis in situations of major stressors like medical emergency. It is recommended to identify all adult patients who are at risk of adrenal suppression and be issued with a RED steroid emergency card by their prescribers. An image of the card is shown below:

All prescribers are urged to regularly review prescribing of steroids either as scheduled reviews or at the point of authorising a repeat prescription. Community and hospital pharmacies are not currently required to supply the RED steroid Emergency alert cards, but have been advised to source the supplies in order to enable them to replace patients’ lost/damaged Steroid alert cards.

Who should receive a Steroid Emergency Card?